In the past, the annual REALTOR® Advocacy Day in Hartford, Connecticut, looked similar to lobbying events across the country:  about 500 members of the state association would venture to the capitol building and lobby the legislature, one bill at a time. This year, the Connecticut REALTORS®‘ Board of Directors wanted to engage members in bigger numbers. Thinking outside the box, they did so in a big way: on May 9, more than 2,200 Connecticut REALTORS® gathered on a public green outside the capitol—and the legislators came to them.

“We Sell Connecticut, Give Us a Connecticut to Sell” was the loud and clear message from the record crowd of Connecticut REALTORS®, many sporting REALTOR®-blue scarves and neckties.

Chief Executive Officer Cindy Butts explains the impetus behind the wildly successful REALTOR® Rally.  “Our leadership is politically aware, and they’re also proactive. They know there are a number of very serious legislative issues on the horizon that that will define the future of our state. The question was, do we prepare to tackle them by building our war chest? Or by building our army?” Because much of Connecticut falls within the very expensive New York metropolitan media market, launching even a single public issue campaign effectively can be cost prohibitive. So the board decided to build its army.

Members seemed to have grown tired of the usual Advocacy Day format, so the state association president and his team decided to bring it outdoors. Instead of concentrating on a list of individual bills, the focus was a global message about improving the business-friendliness of the state of Connecticut.

“Michael Barbaro, our 2017 President, is incredibly dynamic,” says Butts. “He went out to the local associations and personally sold this event. Having the locals on board was hugely helpful, and made all the difference.”

The board agreed to give members as many reasons to come as possible:  a $100 dues increase approved for 2018 would be discounted by $100 for all who attended; parking options were identified and made free of charge; buses from local areas were provided.   Along with a BBQ, Butts’ team found the best food trucks in the state, and had them serving free fare, from pizza to cannolis to gluten-free, until the lines were gone.  The biggest draw of all was the legendary Hall of Fame Women’s Basketball Coach Geno Auriemma, who led a lineup of dynamic speakers including the Connecticut REALTORS® president and key legislators, who addressed the REALTORS® and the 50 state legislators in attendance in full view of the gold-domed capitol building.

The overall expense for the outdoor rally was about ten times what the typical auditorium event cost the REALTORS®, but Butts says there wasn’t a single event cost they would have trimmed: “When you’re trying to save your state, it’s not a time to skimp.”  In addition to the permits, food, transportation, and parking vouchers, there were 32 portable bathrooms, and a first aid station.  Bold, professionally designed signs proclaimed “We Sell CT,” “Build a Stronger CT,” “Real Estate=Jobs,” “Jobs=Growth,” and “Homeownership Matters.” Blue-and-white REALTOR®-branded umbrellas, distributed because there was no rain date, made a big impact in the spectacular photos taken by drones overhead. The high-visibility and highly photogenic event was covered by all the local news stations, including one live broadcast, and by media outlets across the state.  Social media projected the energy of the Connecticut REALTORS® far and wide, and all the free coverage laid valuable groundwork for those legislative battles down the road.

Butts reports that the goal was to draw 1,000 members to the REALTORS® Rally; having met that (twice over!) the $100 dues increase was waived for the entire membership. Will the Connecticut REALTORS® repeat the outdoor rally format next year, given the great turnout in May? “We don’t know what next year will bring,” says Butts, “but whatever the Board of Directors wants to do, we’re on board to implement the vision.”

The real success, she notes, is not just that more than 2,200 REALTORS® came to the rally. It was in how they left: “Everyone came away energized to make a difference. That’s our army!”

To learn more about how the Connecticut REALTORS® rallied in record numbers to show state legislators they mean business, contact Chief Executive Officer Cindy Butts at 860-566-8683. 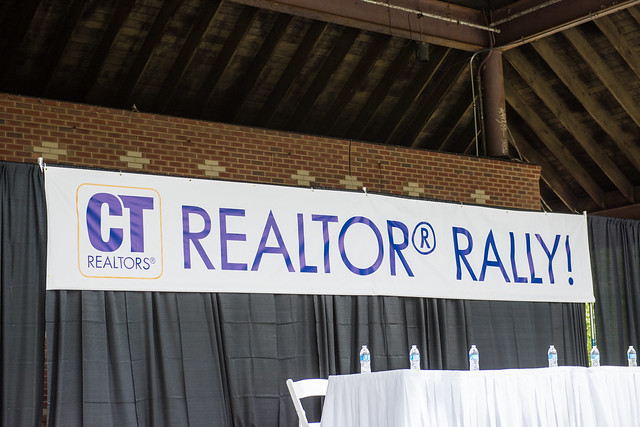